Difference between revisions of "Application:Precorder" 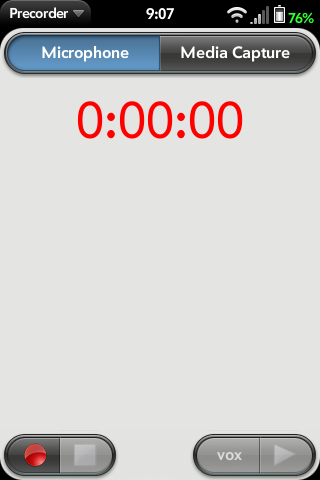 Note: This application is no longer available and has been replaced by zcorder

Precorder is the next generation audio recording app in development by WebOS Internals. Currently, it allows for audio capture from the built in microphone as well as through the headset. It also features a "media capture" mode, which can record virtually any audio stream that is currently playing (except for phone calls). Future plans include bluetooth support, timer, ability to record calls, visualizations, and possibly a voice activation mode.

Precorder uses the pulsesrc plugin directly through a gstreamer pipeline, so in theory it allows for more flexability in the future such as variable controls for stream and bitrate, and various plugins for mp3. Because it uses a C based service, there is only one package to install, which can also be uninstalled with the Orange+Tap method.

Precorder is ALPHA SOFTWARE developed primarily by ZSoc & PuffTheMagic of WebOS Internals with assistance from a number of other developers (as listed in the Maintainers field in the package metadata). Thus, it is only available through the WebOS Internals testing feed.

Please see the official PreCentral thread first post at http://forums.precentral.net/2059462-post1.html for the donation link. Since this is a wiki that anyone can edit, we do not put the donation link here.

Note that you cannot install the packages using any other method than the methods below. Specifically, fileCoaster is not able to install these packages.

Precorder will be added to the main WebOS Internals feed in Preware once it reaches beta status. Until then, please install Precorder from Preware/WOSQI using the testing feed. See http://www.webos-internals.org/wiki/Application:Preware#Adding_Custom_Feeds for more information on how to do add the testing feed to Preware.

When precorder is first launched you will see the main screen. Precorder will default to the Microphone mode. Tap the Record button to start recording audio. Once you have finished capturing, hit the Stop button. There might be a slight wait before you can hit Record again.

Tap the Media Capture button to record currently playing audio. Note that some apps (Video, Youtube, etc) will stop playing if the card is minimized. To capture audio from these sources, you must start the recording in Precorder then switch to the other app and start playback. Precorder will wait until there is audio output before starting the capture.

All audio recordings are stored in /media/internal/recordings in mp3 format. They should be playable through the stock music player and the remix player.

There are several features of Precorder that can be customized. All of these settings are available via the preferences option within the Precorder menu. The table below lists all possible preferences. Options in bold represent defaults.

The Precorder changelog can either be viewed through the WebOS Internals git (http://git.webos-internals.org) or in the Precorder package description in Preware. Changelog is also duplicated below, although it may be out of date.

Precorder is currently in Alpha stages and as such is in a constant state of flux with new features being added and old functionality being modified. Please use this software at your own risk. Due to the alpha nature of the software, please check the discussion page for a more accurate list of bugs and/or feature requests.

Packages in the webos-internals testing feed 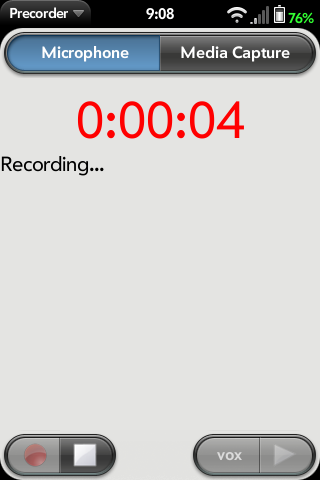 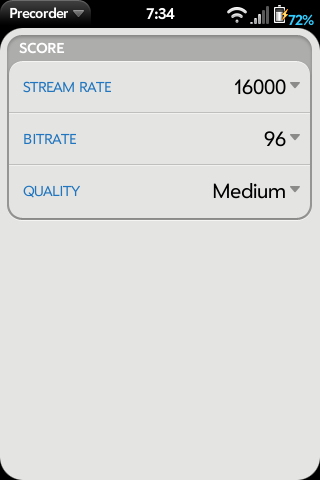