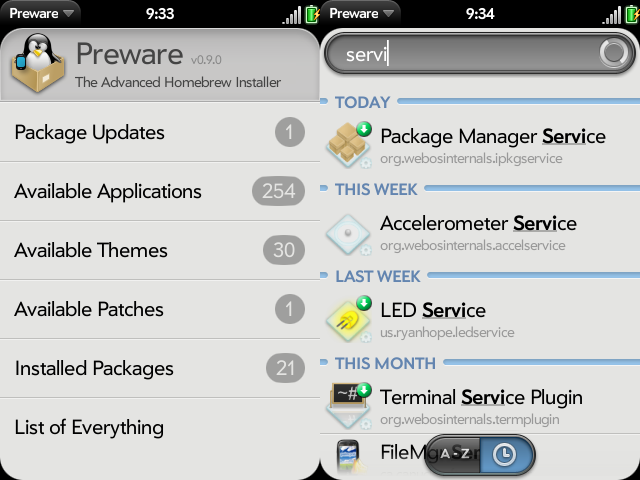 Preware is a package management application for the Palm Pre. Preware allows the user to install any package from any of the open standard package repositories on preware.org (or any other location that hosts an open standard package repository). Preware relies on a custom written service developed from community research which allows the mojo app to talk to the built-in ipkg tool.

This application was the result of extensive community-based design in IPKG Service and Preware Design.

For application management, Preware can access more applications, and has more features, than any other on-device package installer.

And since it is open source, and has a completely open development process supported by a team of world-class WebOS Internals developers, it will continue to get better much faster than any other package management application.

Preware is the open application installer that has been written specifically to support a homebrew ecosystem where any developer can upload any application to any submission site, and that application can then be installed by any user. Developers no longer need to upload their applications to multiple submission sites, and users are no longer excluded from accessing applications from any open standard package repository.

Preware does not individually sequence dependencies during installation, and ipkgservice only runs the postinst and prerm scripts for the requested app, so if you have a depedency for the app that you're installing, and that dependency needs a postinst or prerm script to be run, then it will fail to run them. Please install the dependency first, and then install the app that you want. This will be fixed before the 1.0.0 version.

You do not need to access the Linux command line or "root your Pre" to install or use Preware.

Note that you *must* use version 2.01 or later of WebOS Quick Install. Version 2.0 had a bug which causes the installation of the Package Management Service to fail, and Preware then hangs on the initial "Updating" screen. A re-installation with version 2.01 should fix that.

Please use the WebOS Quick Install tool to install the Package Manager Service and the Preware application directly from the WebOS Internals feed.

No other application installer tool is sophisticated enough to install the custom Package Manager Service that Preware requires. Preware can install it, but you need a way to bootstrap Preware first, so you need to use WebOS Quick Install for the very first installation of Preware.

Note that Preware works just as well on the Emulator as it does on a real device, and is installed in exactly the same way.

Why would you ever want to remove Preware?

To remove Preware, use WebOS Quick Install's Device Management page and unselect the Package Manager Service and the Preware application.

0.7.7: Addition of ipkglog and config list, and if ipkgservice fails at start it notifies people, and if it fails after postinst it considers it complete anyways

0.7.4: Fixed remounting of root filesystem for post-install and pre-remove scripts on the Pre.

0.7.0: Initial support for post-install and pre-remove scripts, including secure informed user consent. Does not work properly with dependencies yet, so please install dependencies one at a time.

0.6.5: Updated icon and other graphical annotations.

0.6.2: Categories now work to some extent. Still a bug in the drop down box.

0.6.1: Sorting by name or date is now available. Application details screen is much more organized.

Preware and the Package Manager Service are housed in the applications/preware and services/ipkservice git repositories at http://git.webos-internals.org/

Really, unless you *really* know what you are doing, you should use the WebOS Quick Install installation instructions above.

This method is for LINUX EXPERTS ONLY and depends on the ipkg.preware.org/feeds/webos-internals repository. If you've already installed Application:Terminal then please SKIP the first steps.

Setting up the repository

Really, unless you *really* know what you are doing, you should use the WebOS Quick Install installation instructions above.

Really, unless you *really* know what you are doing, you should use the Preware update instructions above.