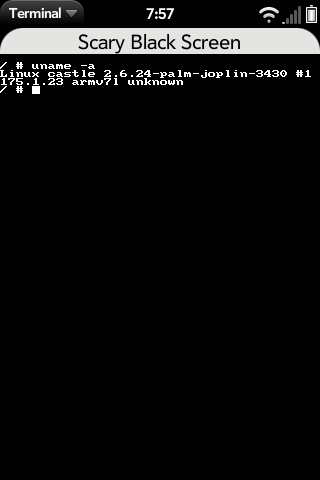 Terminal is a mojo applicaton for the Pre which runs a full VT-100 or Linux terminal in a mojo scene. Terminal relies on a custom written plugin developed from community research which allows the mojo app to talk to the back end. It can be used for local operation to run your Pre, or can reach out from the Pre to other computers.

This is alpha software. Consider yourself lucky if it works at all. Many people have put many hours of hard work in to get just this far - respect that effort when making comments and suggestions.

Install Preware, WebOS Internal's over the air installer, and simply choose and install Terminal from the available applications.

Rotating the pre will take the terminal to landscape mode. The keyboard will not rotate with you. Attempting to physically force the keyboard to rotate to the proper orientation for landscape mode is known to bork a Pre. :)

Support for both "linux" and "vt100" term types should now be supported, so an export TERM line should no longer be needed. If you find your screen filling with gibberish that looks like ANSI codes, however, make sure you're using 0.1.4 or later version, and report here or in the IRC channel what you were running in the terminal that caused the issue.

If you do see odd behavior, you can force the more compatible vt100 terminal type by typing:

(followed by enter) Note that the case of that command is important.

Remember, this is early alpha software. You're lucky it works at all.

Some limitations: Many keys are not implemented. We're working on it, maybe even as you read this. :)

Y and U: Y and U in the emulator return the same raw keycode due to a bug in the emulator. However we're obtaining the key values a better way now so terminal should no longer be susceptible to this flaw.

Terminal is housed in the Applications section of the Webos-internals repository at Gitorious. http://gitorious.org/webos-internals.

Source code for the Mojo app can be browsed at http://gitorious.org/webos-internals/applications/trees/master/terminal

Source code for the plugin can be browsed at http://gitorious.org/webos-internals/applications/trees/master/termplugin