Difference between revisions of "Nintendo" 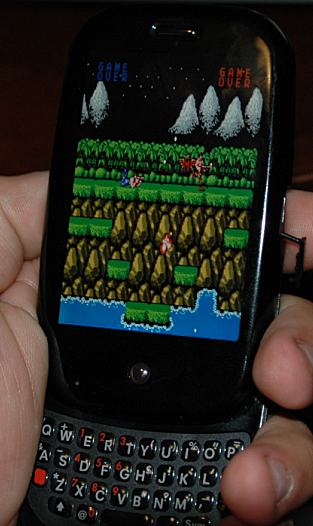 Nintendo emulation is now possible without having to run "Classic" for WebOS. Simply compile FCEUltra from within a Debian chroot.

1. Type the following in a Debian chroot, as root:

3. Extract the bz2 using bunzip2, then extract the tar by typing the following:

4. Switch to the source path:

5. Compile the program from source by typing the following:

When done compiling, the program is copied to /usr/local/bin. When you first load the application, a configuration directory is created in your $HOME path. Modify this file as needed. Using the instructions here, install and configure directfb. Some program specific notes about the directfbrc config file:

7. Run the following command to configure the key mappings:

8. Outside the Debian chroot, type the following command to shutdown the LunaSysMgr:

9. Play your favorite games by typing the following command:

10. When finished playing, you can re-enable the LunaSysMgr by typing the following outside the Debian chroot:

Launching from within Webos

The emulator can be launched from the Mojo Webos Terminal app, which can be downloaded from Preware. The emulator even works with Luna on, meaning you can launch it from the Webos Terminal, and receive calls even when playing a game. To exit games when playing like this, press the orange button to return to normal Webos function.

However, with Luna on, the Webos GUI functions will turn off the screen and go into sleep mode after a period of time, which causes the emulator to crash. This period of time is defined in the Webos 'Screen & Lock' application under 'Turn Off After'. A workaround is to either tap the screen periodically before the screen turns off, use the "disable screen timer" functionality in the Webos app "Mytether", or use the "More Standby Times" patch that can also be applied using Preware (original patch notes available here.