From WebOS Internals
Jump to: navigation, search
« Go Back to the application list 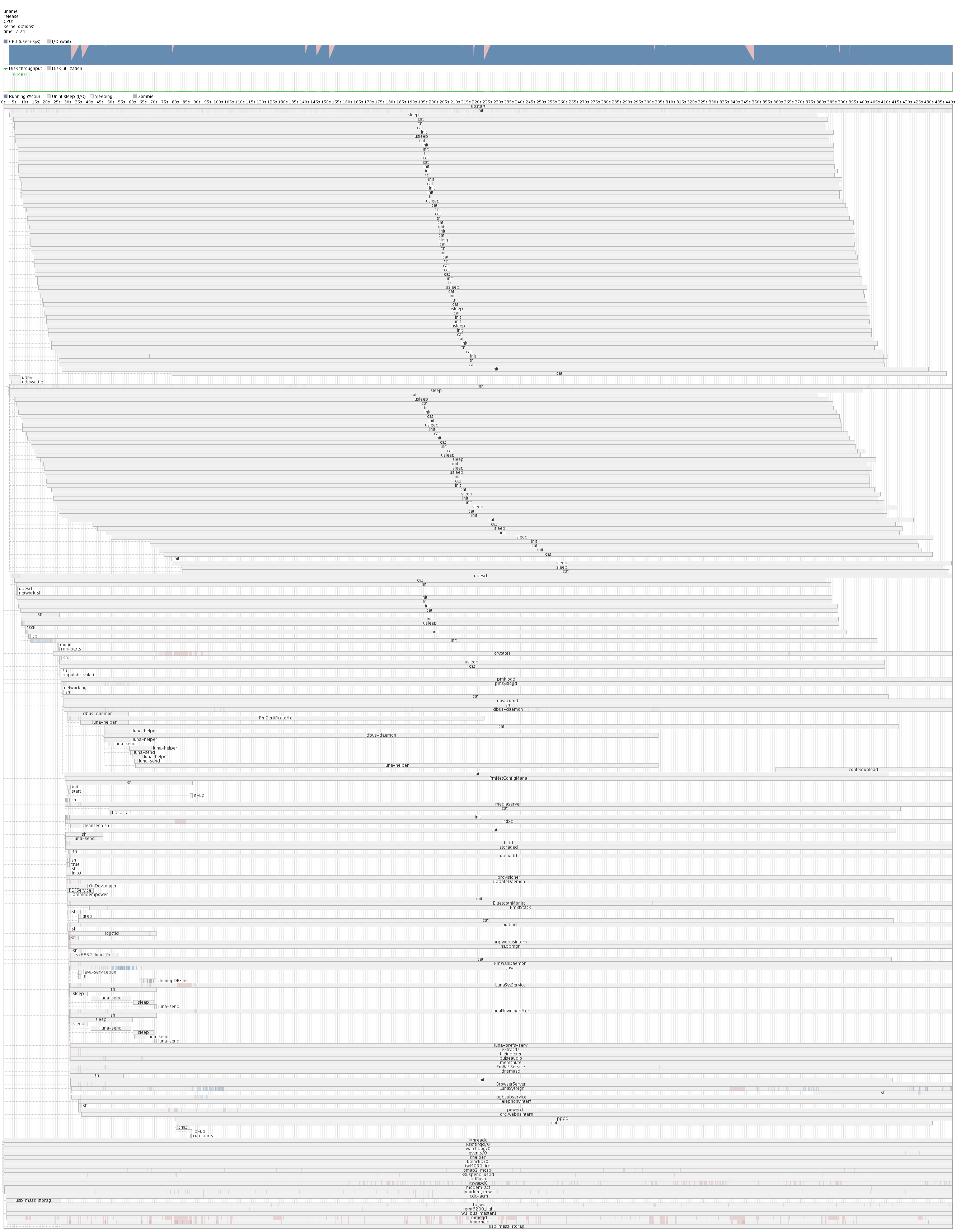 Bootchart is a tool for performance analysis and visualization of the GNU/Linux boot process. Resource utilization and process information are collected during the boot process and are later rendered in a PNG, SVG or EPS encoded chart. Its home page is http://www.bootchart.org. Bootchart is distributed under the GNU General Public License v.2.

There is only one config file that you need to be concerned with: /etc/bootchart.conf. This is the default file:

In order to enable bootchart to run at boot time, you need to run: '/sbin/bootchart_enable'. Before rebooting your phone, you need to make one change in the config file. Change the line that says "AUTO_RENDER" to "yes".

That program (/usr/bin/bootchart) does not exist in webOS, so bootchart cannot autorender the chart for you. In my experimenting however, if the config was NOT set to "autorender", the dump files from bootchart were not created at all. I don't know why this is yet.

To get webOS to creat teh logs needed for a pretty bootchart chart, simply reboot the phone after making the config file change. The boot will be MUCH slower than usual, and it will be slow once the OS is done booting as well. The raw logs will be in "/bootchart".

That will get yourself a copy of the logs.

Once you have a copy of the logs, disable bootchart for the next boot:

You may want to reboot your phone now since it will be running VERY slow. As far as I can tell, bootchart is trying in vain to find the renderer and is in a constant state of trying and failing (because the renderer doesn't exist in the webOS distro).

The directory of logs will be 32Meg in size. You may want to "zip" it

You now need to get bootchart.tgz onto a Linux machine that *does* have bootchart installed. On Gentoo, simply "emerge bootchart".

Once on the Linux machine (assuming you put bootchart.tgz - adjust accordingly if you didn't):

You will now have "bootchart.png" in that same directory. You can change the file format (-f) to svg if you want a scalable graphic.

Here's two bootcharts from my main personal machine (Gentoo). I have disabled and enabled "parallel booting" (starting all boot services in parallel vs. "serial").

You see from the Gentoo charts what a system that has a sense of order should look like. You should also see (plain as day...) why it's important for apps to send the "Done!" signal back to the caller. webOS's init is FULL of "sleep" commands because exit status seems to never be called back to init, so they make everything sleep hoping that the services started. See this comment in /etc/init.d/watchdog.sh:

So even though it's been timed out, they muse about an additional 2 to 7 seconds to be safe, but they set it to 60:

This is just one example of how much more stream lined the boot process can be made to be.

I don't have much to go on. The webOS bootchart is a mess and I don't know where to start yet. It's a hacked together kludge of shell scripts estimating when system services should be done loading, not getting a call back from them saying that they are done.